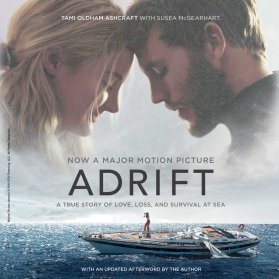 Originally published in 2003 as Red Sky in Mourning, this memoir tells the harrowing story of Tami Ashcroft and her fiance’, Richard, sailing from Tahiti to San Diego–except that their voyage turns to tragedy when they’re hit by a hurricane which nearly destroys the boat, knocks her out for more than a day, and sweeps him overboard to his death. I’ve always been a fan of adventure memoir, especially stories at sea, and in terms of a good story, this has all the elements: unpredicted hurricane winds, romance, sailing life, re-rigging a boat after everything breaks, navigation, lots of nautical terminology, and ultimately, survival. What it lacks is good writing; honestly it’s about as cheesy in places as writing can be—my high school students wouldn’t dare turn in a cliche’ description like this: “I looked down into in China blue eyes.  They were full of joy. He squeezed me close and kissed my pareu-covered stomach.  I couldn’t help but smile, he was like a young boy in his excitement (2).” I had to do a lot of skimming to get through writing like that (and that’s just one of many, many passages of the sort), but like so many adventure-at-sea stories, the events—and how she handled them—were compelling.  After the movie rights were purchased for her book, it was renamed Adrift, and it’s either coming out soon or has recently made it to the screen, though with some apparently large plot alterations (in the movie, the fiance survives, for instance). Not only will the movie diverge from the book, but I have to wonder how much the book diverges from the original story since the events took place in 1983 and the book was written 2003.  That’s 20 years of recall.  And one would hope that in 20 years, the cliche laden writing might have been improved. Still, an interesting few hour read.