How Democracies Die by Steven Levitsky and Daniel Ziblatt (2018) 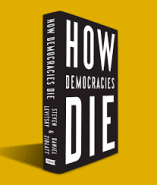 At times, this reads a bit like a textbook, but I appreciated the background that these Harvard educators and researchers give us in showing how democracies across the world from the 1930s to present day have gradually morphed into autocracies.  Though I was familiar with several of them (Erdogan in Turkey, Orban in Hungary, Chavez in Venezuela), others were new to me. But what almost all have in common is that the leaders started out as a fresh voice representing populist issues (better wages, a stronger voice of the people, a better life for the lower and working class), all were elected democratically, and all turned out to be demagogues.  These current autocrats did not come to power through a coup. They won elections. And then…over the course of several years, they surrounded themselves with power mongers and fear mongers and eventually became dictator-like, suppressing the voices and power of those who opposed them. Yes, it appears to be our current story. And that’s the purpose of the book: to show how these things can happen, to show how a democracy can die. But also so show how they can be stopped by employing basic democratic principles.  The problem is that it’s much harder to do than it is to write about.

I’m not sure I necessarily learned a ton of new information (much of their ideas and conclusions have been presented in the New York Times many times over), but I appreciated their research and the fact that they started the book with a hopeful message.  Yet, I didn’t feel much hope by the end. To succeed, we need (in the words of their friend Daniel Allen) this: “a multiethnic democracy in which no particular ethnic group is in the majority and where political equality, social equality, and economics that empower all have been achieved”.  Unfortunately, this has never been done. It is, according to the authors, “America’s greatest challenge.” This is an important–and scary–read.