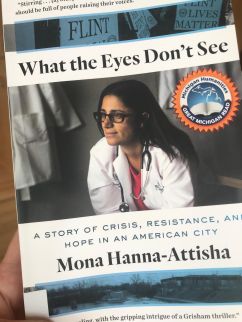 It’s 2015, and the Flint water crisis has been fumbled, covered up, denied, and it took a local pediatrician to bust it all open. This is her  horrifying but ever so important story of the water switch, the lead tainted water, and he role in making it right.  But it will never be right because lead damage is irreversible, so Dr Mona acknowledges it was a primary failure and the only course left is a secondary intervention to mitigate the damage.   The fact that her team was able to pressure those in charge to change the water back to the Detroit river and maintain the proper anti-corrosives within 8 months of discovering the tainted water, still left up to 8,000 kids drinking lead in the water for over a year and a half–all of which was a period of denial and defense by the Mayor, the MDEQ, the EPA, the Governor, and countless others.

This book is eye-opening on so many fronts.  I had no idea the extent to which lead poisoning has likely led to a high percentage of developmental delays, ADHD, kids with lower IQs, etc. It’s been a problem forever (in paint, gasoline, and other substances moreso than water in the past), and then we also see which people and industries benefitted from said lead.

She weaves in a bit more of her Iraqi background and family than is necessary, but I understand she wanted to tie show the connection between her work ethic and undying commitment and her family and cultural heritage, much of it based on diligence and helping others.

What The Eyes Don’t See is the Great Michigan Read book, so lots of events will be tied in to this important book.