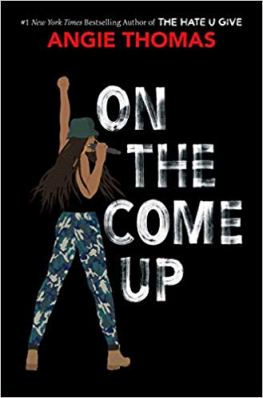 After Thomas’s first book, the best-seller The Hate You Give (THUG), there was a lot of hype about the arrival of On the Come Up.  And while they are different stories, I don’t think this one is as good. I have to remember that these books are young adult fiction (thus I am not the main audience), but because I want to be informed about the books that are all the rage at school, I dove into this with an open-mind. Bri, a rising teenage rap star is a very different character from THUG’s Starr–she’s more outspoken, more radical, more shoot-from-the hip-before-thinking, but their character arcs seemed too similar in the way their internal struggle battles to make sense of their external circumstances. Also Bri’s actions kind of annoyed me, not because she made a lot of stupid decisions (which teens, and surely teens in YA novels are supposed to do), but because her character too often felt inconsistent–like her words, actions, and motives didn’t all fit together. And if I’m being totally honest, maybe I just had a hard time connecting to Bri because I’m not a fan of rap, and that’s her dream and her world (although the writing teacher in me did love all the clever rhymes and her thinking process about words).

That said, I did like the book (it helps that, like many YA books, I read it in about 4-5 hours).  One aspect that stood out–which also stood out in THUG is the way the family members say what they’re thinking. As a parent and a teacher, I spotted some great lines that I’d probably reference.  A few examples: when Jay (her mom) says to Bri, “There will always be someone with something to say, but it doesn’t mean you gotta listen” (160).  Later, when talking about Bri’s Aunt Pooh who was recently busted for drug dealing, Jay says, “do you know what your aunt’s biggest problem is?” (to which Bri responds, “she’s locked up.”) But Jay says, “No. That’s not even her biggest problem.  Pooh doesn’t know who she is, and by not knowing who she is, she doesn’t know her worth.  So, who are you?” (397). That’s a great way to think about teens’ actions: when they struggle to figure out who they are, they don’t really know their worth, and when they don’t know that, they often flounder or make bad decisions. Teens have always struggled with identity because this is when they’re trying to form it, but in today’s  dizzying world of social media and the quest to live in two different worlds, it’s even more challenging for teens to figure out who they are. I think Bri’s internal and external struggles will resonate with a lot of kids today.