Once Upon a River by Diane Setterfield (2018)

It seems like everyone besides me loved this book.  I liked it, and parts of it drew me in, but I also got tired of the story. Maybe I’m just not a fan of mixed genre, and this is part historical fiction, part mystery, part magical realism, part mythology, 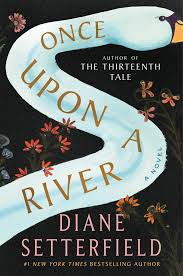 part folklore/fairy tale.  But I think what I found most annoying were the random intrusions by the unnamed narrator:  sometimes he/she would set a scene (that could easily have been set by character actions and dialogue), and sometimes he/she would talk directly to the reader (“See here, in the dip where something catches the light…”).  A weirdly inserted voice like that gave it a story time-for-preschoolers feel, though the story itself is more of a mystery-whodunit sort of thing. Somehow, those two aspects didn’t work together for me.

What I did like was the river as a live setting, almost like it was a character, too. Set in the late 1800s or early 1900s, the tale opens in an Inn on the Thames when a man walks in with a young girl who has drowned.  The rest of the story unravels from there–who is she, why has she drowned, how did she come back to life, who will claim her?  These questions bring together a cast of characters from nearby river villages, my favorite of whom were Rita, Daunt, the butcher’s boy, and Bess.

Perhaps if I had read this story straight through rather than in many sittings over a few weeks, I would have been drawn in to its magic as other readers were. I’d recommend reading it over a weekend or a few days and reading it just for entertainment.  We chose it for book club, but I have no idea what we’d discuss.