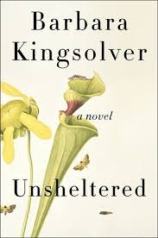 It’s been a long time since I’ve read a Kingsolver book, and I so appreciated immersing myself in her writing.  Some of her descriptions and comparisons make me laugh out loud or shake my head in wonder that she can come up with such perfect words.  While the book is not flawless (more on that later), it is a great relief to read someone who has mastered language and history and can insert references and allusions in just the right places.  The story is really two stories, one in the late 1800s and one in present day, connected by a common house in New Jersey. The present day story centers on Willa who inherited the house and its poor construction after losing her job at a magazine and right after her husband’s college folded, leaving him to take a job as an adjunct professor at a second rate college near the house that they move into but can’t afford to repair. They are also sheltering a dying father-in law, their 26 year-old daughter, Tig, a college drop out (because she refuses to take on debt) and their son’s infant.  So basically they represent the average American family that worked hard, valued education, and did things “right,” but through various circumstances, cannot pay their bills. While this story gets a little too politically heavy-handed with reference to the election and Trump (who is not named but called the bullhorn) and all he represents, this was my favorite of the two storylines, mainly because Willa is a hilariously broken, sympathetic, witty character.  The exchanges between her and socialist/environmentalist Tig  and between Tig and her Harvard educated capitalist brother are priceless.

The other story centers around a 19th c. biologist, Thatcher Greenwood, a newly hired high school science teacher and his neighbor, Mary Treat (a historical figure), and their belief in Darwinism within a religious society highly threatened by such new thinking. So as the story flips back and forth, we can see the connected issues: power threatened by ideas differing from the status quo.  In both stories, the main characters are the highly educated, diligent, forward thinking creatures among powers that prevent them from moving forward. Again, sometimes she drowns us in the issues so much that the story and the characters feel more like a lecture than a narrative, but politics aside, I still enjoyed the premise of the double storyline and the development and exchanges among the characters.