The Distance Between Us by Reyna Grande (2012) 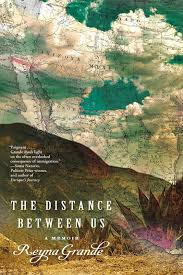 I’m grateful to my former student who recommended this book to me.  It was assigned reading for him at Oberlin College where he also spoke at length with the author.  When I started this story of Reyna and her siblings feeling abandoned by their father who had crossed to the US (El Otro Lado–the other side) to make enough money for a better life, I was reading the book on my porch overlooking Lake Michigan sparkling in the midday sun. Meanwhile, Reyna and her siblings were living with her father’s parents who were abusive and poor. And less than two years later, their mother crossed into the US without them, leaving them to be cared for by her mother, a much more loving woman but also someone living in a shack of tarpaper, tin, and dirt.  The juxtaposition of their life and my own was hard to comprehend. Reyna’s father (who eventually comes back to get them), left to make enough money to build a sturdy house in Mexico, but with the devalued peso and lack of job opportunity—despite hard work–there is no reason to go back and every reason to stay in the US. His heart is in the right place, but he’s also a drinker, he’s abusive, and he does not know how to love (himself or others).  He’s both pathetic and sympathetic. Reyna’s mother also seems to lack the ability to love. First she’s abandoned by her husband, then she follows him to the US and abandons her children, then her husband abandons her in the US and she returns, shamed, to Mexico. She’s also pathetic–and sympathetic. This cycle of abandonment–abuse–striving for a better life swoops the entire family into its whirling, chaotic path.

Only Reyna truly finds a path that leads somewhere positive.  Yet each family member–damaged by circumstances beyond their control–tries to find a way forward. That’s what gives this story such depth: emigration, poverty, family separation, immigration, language barriers, Mexican oppression of women, unplanned pregnancies.  All of these factors play into the need for families to seek a better life and yet they are also the factors that make that better life so difficult to achieve. Above all, the book shows the heartbreak and long-term consequences of separation and the challenges of leaving one country and trying to be part of another while not losing your identity. There is so much complexity in this story, and no simple answers: no heroes and no villains.

I finished the book two days after the domestic terrorist attack in El Paso, Texas by a White Supremacist who declared it a response to “a Hispanic invasion of Texas,” and all I could think was he has no idea what it means to emigrate, no idea what families go through for a chance at opportunity when their own country offers none, no idea that this “invasion” is so often parents with children in tow, grasping for a way to feed themselves and live in something more than a tin shack. Our conversations about immigration need to start with a better understanding of its complexity, and a better understanding might lead to more effective policies. This book is a good place to start.